As stated in the first section of this paper, and inferred in the facts about his life, there is little question that Tim Goodale knew much about the old trails in the Northwest, which predated early white men’s travels in their mass migration west and which migration turned many of the Indian trails into emigrant roads. Sufficient information about Goodale’s life has been published to indicate that he was a mountain man and explorer, and was married to an Indian wife. He had for years traveled much of the west, and no doubt knew most of the trail routes across Idaho. That was the reason the wagon train leaders of the train that bore his name hired him to lead them on a journey along a little known route north of Boise, surely all of which not one wagon had ever before traveled!

To begin with, Goodale seemed to have explained to those wagon train leaders the late fall conditions of the route of the main Oregon Trail, from Fort Hall around the Snake River, and also the little traveled Jeffrey’s Road. Historians believe that he partly gave the choice to those men to decide their route, though he may have strongly promoted the Jeffrey route. He then led them along their chosen route, and apparently knew ahead of time much of what they would encounter as they traveled. Their sometimes anger at him for the trail hardships they encountered did not deter him and did not prevent him from finishing the agreement made to get them across Idaho! He was probably somewhat confident about where he was going.

Thus when that portion of his traveling companions chose to follow him on the new route north of Boise to the mines several writers have suggested, maybe without direct and first hand information, that Goodale had known about the old Indian trail north of the present Emmett and through the Crane Creek area. Irving Merrill and Merle Wells wrote, “Indian trails from later Emmett to Upper Weiser Valley could not accommodate wagons, and Goodale knew enough about that country to avoid traps there. He took his gold hunters down Payette Valley to [the] Snake River.” [1]Merrill and Wells, p. 11. Jewell included a written account of the Goodale Train travel, written by Dunham Wright The main motivation that took the emigrants around the route of the three Rivers, rather than through the Crane Creek trail (Maps, pp. 13 &17), was surely that trail’s condition rather than his lack of knowledge about the route. One would like to believe that he approved when that central route was later opened, and soon developed for all modes of travel. 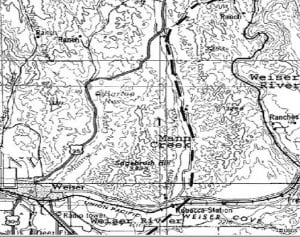 Goodale probably recognized that much road building/clearing would have been required to get wagons all the way up that central Crane Creek route to the present Cambridge Valley. There was some road building necessary along the lower Weiser Valley, part of his chosen route (Maps, p. 8), but surely much less than the straighter and shorter route would have required. They took little time in getting through the three Rivers’ route.

After pack train miners began to use that central route to get to the Boise Basin gold discoveries, during the same fall as Goodale’s passage, [2]Idaho State Historical Society, “Gold Rush Route, Brownlee to Placerville.” ISHS Reference Series, #1014 (August 1993), p. 1. From an Internet Google search, “Salubria, … Continue reading it became the preferred route from both directions between Boise and the emigrant-built Brownlee/Goodale road to the Brownlee Ferry. It appears now from the evidence discovered in this research and from one report of this route’s use that as early as March 1863, the central route was improved enough to handle wagon traffic. (Information will be detailed later.) A trip today over the route offers a little understanding about areas that would have needed work for wagons to be able to pass, but these are not very numerous.

The original route followed by Goodale to the north between the lower Weiser River and the Cambridge area, through Middle Valley, had very few followers along Goodale’s trail for several years. In 1863, Reuben P. Olds built a ferry across the Snake River near Farewell Bend. A large amount of Oregon bound emigrant traffic began to use the Payette River-Goodale’s and the south side variant route-to get from Emmett area to the Snake River. They crossed on the Olds Ferry to the Burnt River route of the Oregon Trail. The Ferry often made “$400-$500 dollars a day,” and “turned the tide of emigration through the Weiser Valley rather than through Parma and Malheur.” [3]James L. Huntley, Ferry Boats in Idaho (Caldwell, ID: Caxton Printers, Ltd., 1979), p. 205. Thus that part of Goodale’s route became very important for several more years of emigrant travel across Idaho.

Little information has been found that would support much follow-up use of the route from Weiser over to Middle Valley and to the upper valley where the town of Salubria would be built-a bit SE of the present Cambridge. Within a few years when the Middle Valley began to be settled, around the area of Midvale, ID, emigrants traveled across Idaho to reach that area. Several family descendents’ accounts, and a few wagon train diaries, indicate that those pioneers traveled by way of the Emmett through Crane Creek route, and then on over a steep hill back to the SW down to Middle Valley. One lone account of a family that went from the Weiser River over the original Goodale route to Middle Valley (mentioned in the first section of this paper) hints at possible reasons that the Weiser route was little used for some years after Goodale’s Train.

On a day in May of 1867 one might have seen a covered wagon drawn by a span of big Missouri mules crawling up the slopes toward the summit dividing Weiser from Middle Valley.

It must have been a relief to the family of emigrants, there-in, to see ahead the top at last, after a day of jolting, lurching, pounding over a rough rocky way. They were aware too, that their destination lay not far beyond this summit.  [4]Adelia Parke, “My Mother’s Family were Pioneers” (Midvale, ID: Midvale Library, n.d.), p. 1. An unpublished family history written by a former Midvale resident and archived at the … Continue reading

The writer went on to say that her mother had told her that the team that pulled the wagon was worn out, all this insinuating that the trail there was still very bad even by 1867. The exact year of the traveler’s arrival in this account, written later, is a bit suspect since other records claim that a Reed family was the first white family in Middle Valley, and only by 1868. This will be verified later. However, the information about the road seems credible.

The federal employee who originally surveyed the area between Weiser and Middle Valley in 1870, included roads of that day on all of his land plats-also mentioned in his survey notes-as well as old road remnants where they had crossed township and section lines. No road at all was indicated across either T11N, R5W or T12N, R5W, Boise Meridian, that is, nowhere near where the present U. S. 95 passes NE toward upper Mann Creek. Across the bottom of T11N, R5W, along the Weiser River, the road to the Olds Ferry was included, and was continuous across all other survey plats that apply. Other connecting routes of that day were also shown. No indication was found by 1867, in any source, of a road north except along Mann Creek, continuing for a total of 14 miles north (Maps, p. 8, bottom and top). That road went all the way north and then NE, avoiding the Highway route until it approached where U. S. 95 now lays, 7 miles SW of Midvale (T13N, R4W, Sec. 32). [5]LaFayette Carter, Surveyor Gen. of Idaho, Land Survey Plats (Boise: BLM, State Office, June and November 1870), Allen Thompson, Surveyor. Obtained from Microfilm files at the BLM State Office, Oct. … Continue reading From there northeasterly it can now be concluded that some miles of U. S. 95 was built following the original Goodale trail route, until past Midvale.

One only needs to look at a map of the area to see why the first part of U.S. 95, from Weiser NE, was improbably as the Goodale Train route-a prior claim. For a man who had the knowledge about trail routes and the lay of the land like Goodale did, a Mann Creek route seems ideal. It flowed south into the Weiser River almost north of where the Snake River bends back sharply to the west, (Map, p. 31). This is just above the line that separates the present Washington and Payette Counties where it meets the Snake River. One 1860s trail/road found on the old plat of the area, T10N, R5W, left the curve in the River, from the area of the road that curved on NW to Weiser, headed NW across flat land that is now farm fields (Map, p. 31), and on to a Weiser River crossing. It would have easily connected there with a Mann Creek route. (The mouth of Mann Creek is 5 miles east of Weiser!) This would have been the most likely and distance-saving route of the Goodale Train. The evidence of an early Mann Creek trail heading north on the plats appear to indicate Goodale’s continued route after crossing the Weiser River!

There would have been no reason to go easterly to where the Weiser River comes down from the north, if an old trail followed Mann Creek. And for the reason given below, Goodale surely did not try a route near the Weiser River! By the process of elimination following a Mann Creek trail, the only trail north on the first land plat, seems reasonable.

The following statement, “To get from Lower Weiser to Upper Weiser valley, [Goodale’s train] took an old Indian trail approximately along modern US 95 (this writer’s emphasis) because Weiser River winds through a series of canyons unsuitable for travel,” [6]ISHS, “Goodale’s Cutoff from Boise Valley to Powder River.” Reference Series, #1048 (June 1994), p. 2. Internet, “Tim Goodale” search, 10-21-2004. is a bit inaccurate concerning the lower part of the Highway 95 route. If the southern part of the original trail was along the Highway route, rather than following Mann Creek several miles parallel to the east of U.S. 95, there is little evidence anywhere that this part of the original route was ever followed by wagons or any other traffic. The surveyor indicated only one trail/road, which followed up along Mann Creek, in place by 1870.

Back to: Goodale North Trail

This site uses Akismet to reduce spam. Learn how your comment data is processed.

Enter your email address to subscribe to Idaho Genealogy and receive notifications of new posts by email.